Home Types and Styles of BBQ

Types and Styles of BBQ

There are many different types of bbq and there is no “best” kind. Each type of bbq has a distinct flavor and style. You will find that not all bbq caterers follow the rules for their style type. However, understanding the type of bbq the bbq caterer uses can give you a clue on the taste you will experience.

Carolina barbecue is usually pork, served pulled, shredded, or chopped, but sometimes sliced. It may also be rubbed with a spice mixture before smoking and mopped with a spice and vinegar liquid during smoking. It is probably the oldest form of American barbecue. The wood used is usually a hardwood such as oak or hickory. We have some great Carolina style caterers. Get a quote from one of our caterers and find out how good Carolinas BBQ really is. Read more about Carolinas Style BBQ here. 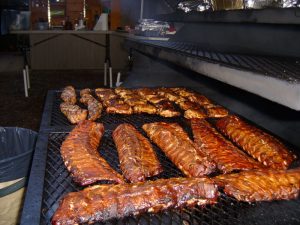 Barbecue was brought to Kansas City, Missouri by Memphian Henry Perry. Despite these origins, the Kansas City style is characterized by a wide variety in meat, particularly including beef, pork, and lamb; and a strong emphasis on the signature ingredient, the sauce, and the french fries. The meat is smoked with a dry rub, and the sauce served as a table sauce. Kansas City barbecue is rubbed with spices, slow-smoked over a variety of woods and served with a thick tomato-based barbecue sauce, which is an integral part of KC-style barbecue. Major Kansas City-area barbecue restaurants include Arthur Bryant’s, which is descended directly from Perry’s establishment and Gates and Sons Bar-B-Q, notably spicier than other KC-style sauces with primary seasonings being cumin and celery salt.

Memphis barbecue is primarily two different dishes: ribs, which come “wet” and “dry”, and barbecue sandwiches. Wet ribs are brushed with sauce before and after cooking, and dry ribs are seasoned with a dry rub. Barbecue sandwiches in Memphis are typically pulled pork (that is shredded by hand and not chopped with a blade) served on a simple bun and topped with barbecue sauce, and cole slaw. Of note is the willingness of Memphians to put this pulled pork on many non-traditional dishes, creating such dishes as barbecue salad, barbecue spaghetti, barbecue pizza, or barbecue nachos.

There are four generally recognized regional styles of barbecue in Texas: