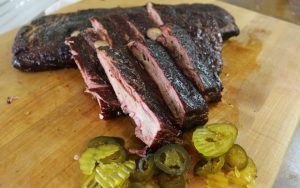 Texas Barbecue is a traditional style of preparing meat unique to the cuisine of Texas. It is one of the many different varieties of barbecue found around the world.

Texas barbecue traditions can be divided into four general styles: East Texas, Central Texas, South Texas, and West Texas. The Central and East Texas varieties are generally the most well-known. In a 1973 Texas Monthly article, Author Griffin Smith, Jr., described the dividing line between the two styles as “a line running from Columbus and Hearne northward between Dallas and Fort Worth”.

Additionally, in deep South Texas and along the Rio Grande Valley, a Mexican style of meat preparation known as barbacoa can be found. In Spanish, the word barbacoa means “barbecue”, though in English it is often used specifically to refer to Mexican varieties of preparation.

The barbacoa tradition is somewhat different from all of these. Though beef may be used, goat or sheep meat are common as well (sometimes the entire animal may be used). In its most traditional form, barbacoa is prepared in a hole dug in the ground and covered with maguey leaves. 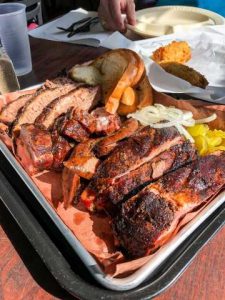 European meat-smoking traditions were brought by German and Czech settlers in Central Texas during the mid-19th century. The original tradition was that butchers would smoke leftover meat that had not been sold so that it could be stored and saved. As these smoked leftovers became popular among the migrants in the area, many of these former meat markets evolved to specialize in smoked meats. Many butcher shops also evolved into well-known barbecue establishments.

In 1964, President Lyndon B. Johnson hosted a state dinner featuring barbecue for the Mexican president-elect in Johnson City, Texas. It is generally considered the first barbecue state dinner in the history of the United States.

In 2019 J. C. Reid of the Houston Chronicle wrote that pulled pork barbecue was becoming common in Texas even though the style originated elsewhere. 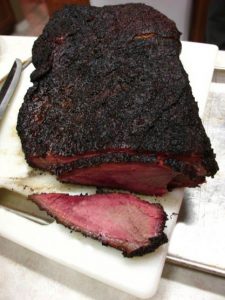 Central Texas
Central Texas pit-style barbecue was established in the 19th century along the Chisholm Trail in the towns of Lockhart, Luling, and Taylor. The German and other European immigrants who owned meat-packing plants opened retail meat markets serving cooked meats wrapped in red butcher’s paper—a tradition which continues to this day in many Central Texas towns. This barbecue style’s popularity has spread considerably around the world, especially to Southern California, New York City, Britain and Australia.

Today, many Central Texas barbecue restaurants open around 11:00am and serve until “they are out of meat”. Most barbecue establishments close on Sundays.

At a typical Central Texas pit barbecue restaurant, the customer takes a tray cafeteria-style and is served by a butcher who carves the meat by weight. Side dishes and desserts are then picked up along the line with sliced white bread, wavy-cut dill pickle chips, sliced onion, and jalapeño. Barbecued meats are commonly sold by the pound. The emphasis of Central Texas pit barbecue is on the meat—if the sauce is available, it is usually considered a side dip for wetting purposes. Calvin Trillin, writing in The New Yorker, said that discussions of Central Texas pit barbecue do not concern the piquancy of the sauces or common side dishes and desserts—the main consideration is the quality of the cooking of the meats.

Smith posits this theory on why sauces are not a focus of Central Texas pit style: in the early days, the noon meat markets were dominated by the upper class purchasers, who could choose among the highest-quality cuts of meat with little interest in sauces. Smith describes many sauces in Central Texas pit barbecue as intentionally made “bland”, as compared to the flavor of the meats themselves. The sauce is typically thinner and unsweetened, different than the Kansas City and Memphis styles (which rely heavily on molasses, sugar, and corn syrup to provide thickness and sweetness).

Jayne Clark of the USA Today said in 2010 that the “Texas Barbecue Trail” is an east of Austin “semi-loop” including Elgin, Lockhart, Luling, and Taylor. Barbecue eateries in this semi-loop, like Louie Mueller Barbecue, are within one hour’s drive from Austin, in a direction of northeast to the southeast.

East Texas
East Texas barbecue is usually chopped and not sliced. It may be made of either beef or pork, and it is usually served on a bun.

According to Reid, the presence of pork ribs in East Texas barbecue originated from elsewhere in the South. According to Walsh they had origins in barbecues that were held for slaves. Many black restaurateurs struggled to continue operating restaurants as food safety regulations passed by Texas jurisdictions around 1910 had restrictions on the operations of restaurants until the cinder-block pit became widespread; this innovation allowed black restaurateurs to serve their fellow black customers.

Griffin Smith, Jr., in a 1973 Texas Monthly article, described East Texas barbecue as an “extension” of barbecue served in the Southern United States and said that beef and pork appear equally in the cuisine. According to Smith, the theory on how East Texas barbecue got started was that the emphasis on sauces and spices came as African-Americans received poor-quality cuts of meat and needed flavoring. According to Smith, the “finest manifestations” of the East Texas style were found in African-American-operated restaurants. Smith further described East Texas barbecue as “still basically a sandwich product heavy on hot sauce.”

West Texas barbecue, sometimes also called “cowboy style,” traditionally used a more direct heat method than other styles. It is generally cooked over mesquite, with goat and mutton in addition to beef.

Barbecue in the border area between the South Texas Plains and Northern Mexico is mostly influenced by Mexican cuisine. Historically, this area was the birthplace of the Texas ranching tradition. Often, Mexican farmhands were partially paid for their work in less desirable cuts of meat, such as the diaphragm and the cow’s head. It is the cow’s head which defines South Texas barbecue (called barbacoa). The head would be wrapped in wet maguey leaves and buried in a pit with hot coals for several hours, after which the meat would be pulled off for barbacoa tacos. The tongue would also be used to make Lengua tacos. Today, barbacoa is mostly cooked in an oven in a bain-marie.